Welcome to the 2018 SFR Galaxy Awards 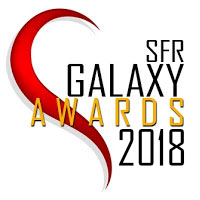 Thanks for joining us for the Seventh Annual SFR Galaxy Awards, recognizing standout books in science fiction romance.

We'd like to acknowledge that these awards were inspired by a giant in the Science Fiction/Fantasy community, author Ursula K. Le Guin, who passed on Monday, January 22, 2018. Her words created the context for the SFR Galaxy Awards. (More about that here.) She is greatly missed as both author and inspiration.

This year, we'll be presenting seven rounds of awards, beginning at 10AM Eastern Standard Time USA. We'd like to thank our panel of talented judges for their work in selecting the 2018 award recipients. This year we'll be presenting a total of 27 SFR Galaxy Awards.

We'd also like to thank the original designer of this site's award banner, the multi-talented cover designer and editor Danielle Fine, and also extend our thanks to the original award icon designer, graphic artist Kanaxa. The 2018 SFR Galaxy Awards banner was designed by Laurie Green.

More About the Awards

The SFR Galaxy Awards is an annual, multi-award event for science fiction romance books. The 2018 awards marks the seventh successive year the awards have been presented.

The theme of the SFR Galaxy Awards is inclusiveness. Instead of giving an award to a single book, this event will recognize the worth of multiple books and/or the standout elements they contain. The basic philosophy behind this approach is to help connect readers with books.

Each of seven judges are reviewers, book bloggers, librarians, editors and/or avid readers. You can find more information about them on the Judges page. Each judge may name one to multiple awards for standout science fiction romance, creating award categories based on their own criteria. They may also opt to provide additional details about the selectee and why they have made the selection.

Authors do not enter to win and are not aware they have won until the awards are announced.

The focus is on the award year titles, however the judges may also make a selection from a prior year and a selection can be a science fiction romance film, television series, video, graphic novel or game. (Further information about guidelines and eligibility can be found on the About the SFR Galaxy Awards page.)

Presentation of the Awards

As in prior years, the awards will be posted in rounds (Eastern Standard Time USA):