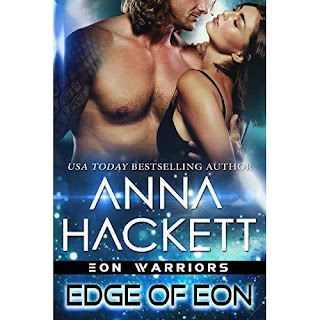 
Summary: Earth finally develops space exploration technology to enable contact with an alien species, the Eon, who, while sharing a common ancient ancestor, want nothing to do with the humans. Then the insectoid Kantos aliens discover Earth as they attempt to take over the galaxy. Only the Eon can stop them, but human appeals for help fall on deaf ears. Earth Space Corps veteran Captain Eve Traynor is sent to kidnap the deadliest war commander of the Eon fleet to get attention, open communications, and get help before the Kantos annihilates Earth.

Reason Selected: This new series by amazing writer Anna Hackett has a very resourceful heroine that manages to kick the feet from under the toughest warrior in the Eon fleet and keeps him unsteady for the entire story. She teaches a lesson to both the Eon and the Kantos to not underestimate humans. I love that the heroine takes charge, kidnaps the hero, and never stops proving she is his equal. Best of all, the series sets up for more stories to come in an overarching plot of humans and Eon learning to trust each other in order to fight a common enemy. 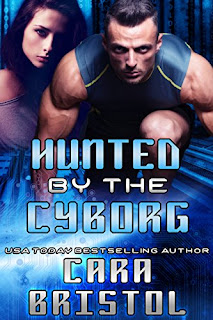 
Summary: Carter Aymes, head of the Cy-Ops organization, comes face-to-face with his past, in the form of an ex-girlfriend. Old feelings stir even as the vision tells him she is his ex-girlfriend’s twin – Beth, not Liza, and that his former love died many years prior. Carter can’t shake the comparisons or the feelings growing between them. Beth feels the attraction, too, but has her own secrets to keep. All the while, Carter, the Cy-Ops organization, and the people around them are in grave danger. The Lamis-Odg terrorists are closer than anyone realizes, and Lamani’s dangerous followers will stop at nothing to spread their religious dogma throughout the galaxy and eliminate all those who disagree with them.

Reason Selected: The Cy-Ops series has been one of my favourite cyborg series to read. Throughout the entire series, Carter Aymes has been in the background, leading the cyborg effort to stop the Lamis-Odg. His character fascinated me from the beginning, and even more so when he suffered an accident earlier in the series that led to his own transformation to become cyborg. Finally, here is the book I’ve been waiting for – Carter’s story. Beth is a very interesting twist, as her secrets are unveiled against a backdrop of political intrigue and terrorism, while Carter proves he is as much of a hero as anyone that has ever stood up to terrorism. 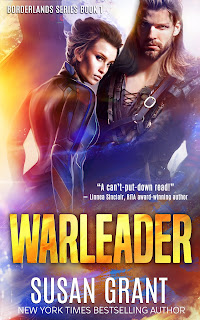 Warleader (Book 1 of The Borderlands series, revised)
by Susan Grant


Summary: Brit Bandarr is one of the most bad-ass captains in the Coalition. She’s ruthlessly hunted down Drakken enemies for years. Finn Rorkken is a Drakken Warleader and former pirate. Or maybe not former, it’s hard to tell with the Drakken now defeated. Then there’s the Terrans, humans from Earth, newcomers on the scene, who have been a catalyst to end the centuries-long war between the Coalition and Drakken. The three species have formed the Triad Alliance to establish peace to the galaxy. With Brit in command of the new Triad diplomatic ship Unity and Finn as her first officer, peace isn’t going to be easy. Falling in love with your sworn enemy won’t either.

Reason Selected: Susan Grant is reworking her previous Borderlands series now that she got the rights back in her own hands. Warleader is a rework of Moonstruck, which was always one of my favourite SFR novels. I hadn’t realized she could make it better, but she did. Some characters have changed quite a bit – one gender switch has me intrigued about that character’s background now. Other characters’ attitudes and references to technology has been updated. Terrans are a little more prevalent throughout the story, better roles on board the Unity and they don’t seem as naïve -- or in some cases annoying -- as they previously did. Brit and Finn have not changed much though, and they still make sparks fly when they are together. Still one of my favourite couples in SFR. 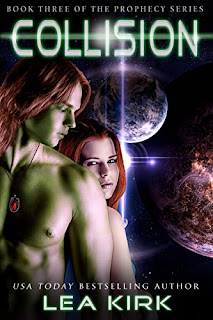 Collision (Book 3 in the Prophecy series)
by Lea Kirk


Summary: Flora Bock was only 10 years old when the first Anferthian ambassador arrived on Earth – now called Terr. She didn’t understand why anyone wanted peaceful relations with the hated aliens who had killed her biological parents, along with many other Terrans! She hated every one of the large, green-skinned Anferthians that existed, but most of all, she hated Fander, the 11-year-old green monster, small for his age, with reddish-brown hair and weird purple eyes. He was the grandson of the ambassador, and he had done something to her. She didn’t know what it was, but she felt an electric shock when their eyes met for the first time, and she fainted. Could anyone blame her for punching him in the face when she got the chance? This began a friendship that drew them closer over the next 4 years, ending in a first kiss on her 15th birthday. The same day Fander was forced to leave Terr and return to Anferthia. Nine more years passed, and the lives of both Flora and Fander have changed. A tragedy brings them together again, and they need to work together to solve a mystery, uncover old enemies, and deal with political intrigue that sweeps from Terr to Anferthia.

Reason Selected:. OK, so Anferthians are not little, being a tall race usually 9-12 feet tall as adults, but Fander is described as “eight-foot-tall” and “still the shortest Anferthian in the bunch.” Anferthians are a powerful, green-skinned race, with a lot of sex appeal and charm, when they are not murderous, xenophobic traitors. Fander is “adorable”, “impossibly handsome”, romantic, and probably one of the sexiest aliens I read the entire year!

Extra kudos for fun alliteration of names (Flora and Fander)

KJ Van Houten is a freelance graphic designer and a book reviewer on the Whiskey With My Book review site. Read more on the Judges page.