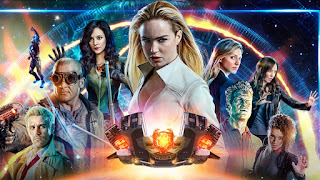 What's a sci-fi romance fan to do when her reading in 2018 took a nose dive? Why, watch DC's Legends of Tomorrow, of course!

In a nutshell, Legends of Tomorrow is about the adventures of a ragtag team of B-list superheroes as they travel through time to save Earth from power-hungry villains.

Many fans of the show agree that it became better with age. We stuck with it despite a lackluster first season and our efforts paid off. There are dozens of reasons to enjoy Legends of Tomorrow (each more over-the-top than the last), and for me one of the standout elements is the romance between White Canary, a.k.a. Sara Lance (Cathy Lotz) and Time Bureau Director Ava Sharpe (Jes Macallan). Putting aside for the moment that the couple is a pair of eerily identical white women, it's been glorious to watch a compelling queer romance develop in a show with a firm sci-fi bent. Even when Legends of Tomorrow is at its wackiest ("Beebo the God of War," anyone?), Sara and Ava's romance anchors it with a relatable and meaningful bond.

Their romance, one between an ice princess and an assassin, unfolds across seasons three and four. Sara and Ava begin as professional rivals, which involves lots of testy exchanges even as sexual tension electrifies their every encounter. Then comes the angst as they struggle to make a romance bloom while facing barriers such as full-time jobs, managing a quirky superhero team, tragic pasts, dark secrets, danger, and, of course, an always-shifting timeline.

Throughout their romance we're treated to hot kisses, sultry looks, and witty banter galore. Another exciting aspect is that Ava and Sara are experts in their fields. Their smarts and skills are hopelessly addicting. Watching them battle alongside each other to defeat villains is nothing short of spectacular. Brains and brawn at its best!

Even better, as of right now Sara and Ava's romance has reached a happy point and shows no sign of ending nor heading towards tragedy. I sincerely hope that by the end of the series, Sara and Ava can stroll off into the sunset together. Or, more likely given their fantastical occupations, leap into another rollicking adventure.

Heather Massey is one of the founders of the SFR Galaxy Awards and has been a contributor to the Sci-Fi Romance Quarterly, LoveLetter Magazine, Coffee Time Romance, Tor.com, Heroes & Heartbreakers, SF Signal, and first gained recognition in the genre for her SFR-centered blog, The Galaxy Express. Read more on the Judges page.