Announcing the End of the SFR Galaxy Awards 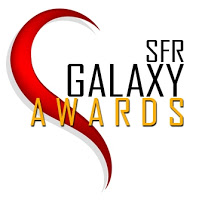 Alas, the SFR Galaxy Awards will be no more. This annual event launched in 2013 and was managed by bloggers Heather Massey and Laurie A. Green. A group of sci-fi romance-loving judges rounded out the team.

It's been a blast highlighting various sci-fi romances using a fun, quirky awards lens. Like all good things, it must come to and end. Here's why:

1. I (Heather) am no longer able to give the awards the nurturing it needs because of family and work matters. I held off as long as possible regarding canceling the awards to see how things would go, but Life Stuff had to take priority.

2. Over the past several years, there's been heightened attention given to the grievous lack of diversity and inclusion in romance awards. The situation has been so dire that Romance Writers of America (RWA) hired consultants to address "diversity, equality and inclusion issues in RWA." This issue has also prompted much-needed discussion in the SFR community regarding the same flaws present in the SFR Galaxy Awards.

The SFR Galaxy Awards has its own racial and gender biases. Even a cursory glance at the numbers reveals the award outcomes are not as diverse as they should be. Though Laurie has been my co-partner in this endeavor, the idea for the awards originated with me. Since I didn't bake diversity and inclusion into the SFR Galaxy Awards as thoroughly as I could have, it would be unethical to continue the event without rebuilding it from the ground up.

I intended for the SFR Galaxy Awards to be inclusive and diverse regarding race, gender, sexual orientation, and #ownvoices across its various parts, but my actions didn't always match my intent. I apologize to anyone who was harmed by my lack of foresight.

If we're lucky to have an SFR specific award event in the future, my hope is that it's designed to be diverse and inclusive so everyone involved feels welcome, celebrated, and safe. Furthermore, if I have the opportunity to create SFR events in the future, I pledge to make them a safe space for authors and readers of all kinds.
***
I deeply appreciate the company of everyone who came along with me on the SFR Galaxy Awards adventure.

Big thanks to Laurie Green for her hard work, generosity, and intrepid support for this event.
A hearty thanks to the judges past and present for their incredible work and enthusiasm. It's been an honor to know and work with them.

Thanks so very much to the winning authors for helping to promote the event as well as their wonderful SFR adventures.

And finally, thanks to the readers who participated, visited the awards site, and helped spread the word. SFR is nothing without its faithful readers.

All the best,
Heather
Posted by Heather Massey at 12:00 PM No comments: