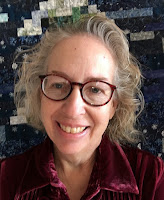 Now I have Riley Moreland, a book reviewer and returning judge for 2017, to tell you more about herself and some updates to her resume. You can also read her profile on our Judges Page.

Thanks so much, Riley, for returning as one of the SFR Galaxy Awards judges this year.

As a reader, I also get excited about seeing the favoriteS of the other judges and their creative awards. SFR Galaxy Award day is one of the best days of the year. It also happens to be my wedding anniversary day. What more could a happily married gal ask for?

Most people have no idea what I am talking about. I don't mind explaining it though. I'm not saying everyone I explain it to gets it. But some people do and that is what is important.

I got this gig because Laurie Green recommended me when the Awards needed a new judge. I made the assumption that she recommended me because she respects my ability to express my opinions when I review books. Talk about an ego boost. I was thrilled to be asked to be a judge! “I am one of the judges for the SFR Galaxy Awards.” I do like saying that!

My blogging/reviewing activity helped get me another gig. Our library board president was really impressed that I had this connection with authors and publishing. I don't know if that was the tipping point that helped me get my job, but 1 ½ years ago, it lead to another thing that I like to say.....“I am a Library Director.”

There are 730 public libraries in Iowa where I live. 461 of those libraries are in towns with a population of less than 5,000 people. Where am I going with this dazzling display of boring numbers?

If you have your MLS (Masters in Library Science), you probably prefer a job in a city library with full time hours and full time benefits. In my library, the Director works for less than $15/hour, 26 hours per week and not too many benefits. Many of those libraries in small towns are looking for someone like me. I wanted to be semi-retired, but have a job with some challenge.

But I still needed some more in-depth library management training. I am pretty much a self-motivated learner, but sometimes that formal classroom training helps fill in gaps I didn't even know needed filling. In November, I completed the State Library of Iowa's Public Library Management curriculum. That lead to actual Public Library Director Certification! I am going to get a fancy certificate printed on a fancy piece of paper, have it put in a fancy frame and hang on my office wall from a fancy nail.

When I was in college the first time, had I known then what I know now, I might have gone for the library science degree. But at my age, I am not going back to school. So my small town library and I are very happy with my Certified Library Director status.

I may boast (yes, I admit I'm boasting) about being a Library Director or a SFR Galaxy Awards judge. But you are a booklover. You get it, don't you? Who doesn't want to be around books and other booklovers, either physically or virtually? Which leads me to the 3rd thing I like to tell people.....“If you like, I can recommend a good book.”

Look for my recommendations on January 31 when the 6th annual SFR Galaxy Awards are announced. See you then!

If want to connect with me I hope you will check out my blog Whiskey With My Book ( https://whiskeywithmybook.wordpress.com ).