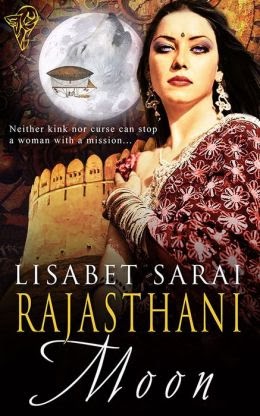 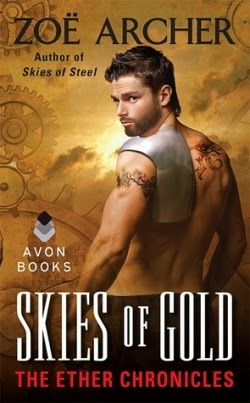 Skies of Gold wraps up Zoe Archer and Nico Rosso's steampunk romance Ether Chronicles, and does so with a flourish.

The finale features a romance between Captain Fletcher Adams, a hermit-like Man O' War, and Kalindi MacNeil, an engineer whose life and body were torn apart by an airship attack. Both have retreated to a remote island to escape their pasts and re-evaluate their futures. At first, I feared the remote island setting would be little more than the couple talking, mentally lusting after each other, and talking some more. And all those things do happen!

Yet a few elements transformed this trope into a particularly compelling romance, including but not limited to: emotionally mature characters, a smart heroine coping with a new prosthetic leg, the hero's humor and perpetually unkempt appearance, and a subtext of progressive sexuality. Fletcher and Kalindi are characters who think plenty of Deep Thoughts and when they do converse, the topics concern important global issues and careful negotiation of their burgeoning romance.

The way in which this story brings two compelling characters together, even when it's simply to talk, make this steampunk romance worth its weight in gold.

*The "They Came To Talk" reference is from "Ab-Dick-ted," a 3rd Rock From The Sun episode. 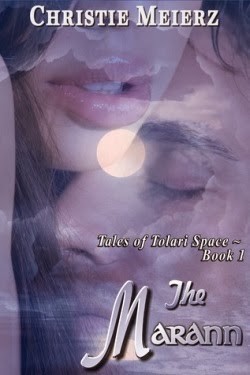 The Marann brings to mind the 1956 film THE KING AND I, but this tale is set in the far future. Teacher Marianne Woolsey is recruited to travel to the distant planet of Tolar for the purpose of tutoring the daughter and heir of the Sural, the supreme ruler. Once there, she must navigate a new culture, political machinations, and an unexpected attraction to the enigmatic Sural. As a fan of the Yul Brynner and Deborah Kerr classic, I was delighted to encounter a science fiction romance with a similar premise. It just sounded like fun, and it was. Plus, the hero is a Person of Color.

The Marann would go great with a cup of tea and a rainy day. It's a low-key romance with a "sweet" heat level and features an alien race of empaths who have other nifty skills as well. This SFR is a neat reinvention of a familiar comfort tale. 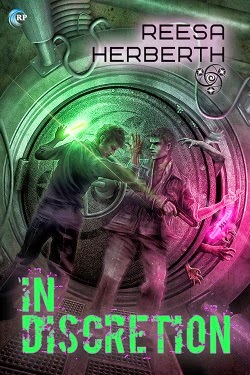 Events in In Discretion makes it really, really, really difficult for Thanson Nez and Kazra Ferdow to rekindle their youthful romance—and that's a good thing! After years of separation, they inadvertently meet aboard a space station whose inhabitants are transforming into dangerous killers. Plus, Thanson possesses a Deep, Dark Secret, but he can't share it—that is, if he wants to live.

This is an action-packed story, and yet the rebuilding of the romance doesn't feel rushed. The space station threat was an interesting foil for the romance, and at the same time it played a key role in bringing Thanson and Kazra back together. 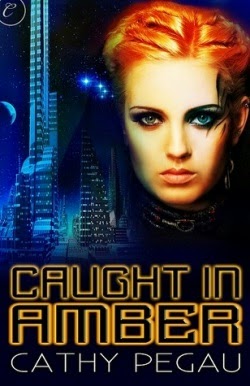 Film noir and science fiction romance collide in Cathy Pegau's Caught in Amber. The hero is a Colonial Mining Authority Agent who enlists the help of the heroine, a former drug addict, to rescue his sister from a dangerous drug lord. The science fiction elements are accessible. The villain is sinister and unsettling. The romance involves two ordinary people trying to right wrongs on a bleak Earth colony.

All these elements make Caught in Amber not only an intriguing read, but a sci-fi romance with real cross-over appeal. 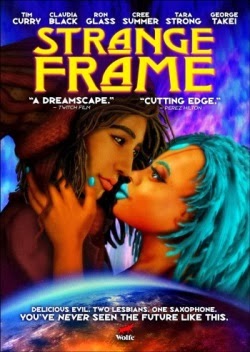 STRANGE FRAME: LOVE & SAX has cult classic written all over it. The combination of a visually stunning cutout animation style, solid science fiction elements, multiculturalism, an ensemble cast filled with People of Color (and genetically engineered) characters, musical numbers, and a lesbian romance tying it all together makes this film the ultimate niche experience. But it also embraces science fiction romance—and informs us about the genre's potential—like no other movie I've seen.

Check out the film's description:

"Set at the end of the 28th century, the human race has long since abandoned a desolate earth. In order to survive, humanity has been using genetic engineering to adapt to otherworld environments, to the point where changing one’s skin color or gender has become commonplace. On the moon Ganymede, saxophonist Parker (Claudia Black) and guitarist Naia (Tara Strong) develop a close relationship. The two embark on their new relationship and form a new band — but they also must fight for their freedom from the evil Mig (Tim Curry)."

The plot is a basic one: Girl finds girl, girl loses girl, girl goes on a mission to reclaim the love of her life. What makes it such a standout film, however, is its sheer sense of diversity. Hats off to G.B. Hajim for taking such a monumental risk as a filmmaker. STRANGE FRAME: LOVE & SAX is a science fiction romance experience that future films in this genre should aspire to be.


About Heather Massey
Heather Massey is a lifelong fan of science fiction romance. She searches for sci-fi romance adventures aboard her blog, The Galaxy Express.

She’s also an author in the subgenre. To learn more about her published work, visit www.heathermassey.com.
Posted by Heather Massey at 6:00 AM