To Everything There is a Season, the Turn, Turn, Turn Award 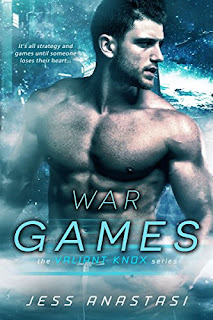 There is a time for everything. And sometimes it is time for a series to end. And sometimes series don’t end when they should, but that’s a different (and not award-winning) post.

The Valiant Knox series is a marvelous piece of ship-based, space-opera science fiction romance. The crew of the Valiant Knox and the alliance that they represent is fighting essentially a guerilla war against a planet of fundamentalist whack-jobs. Or at least, the leadership are fundamentalist whack-jobs and the general population is rightfully too scared to resist the guns pointed at their heads.

The series is not about the whole war from beginning to end, although it could have been, and it would have been fascinating. Instead, what we see in the series is the end game. The self-aggrandizing planetary leader is dying and the Alliance is hoping, and working hard towards, getting the planet out from under as part of the inevitable power-scramble.

Each book in the series has featured one couple who are both somewhere in the hierarchy of the Valiant Knox (itself a cross between Babylon 5, Battlestar Galactica and Deep Space 9) as they fight the good fight, fall in love, and try desperately to look towards a galaxy at peace - if they can get there.

The series has featured one former POW, one fighter pilot, one spy and one security chief, all roles that put them in the thick of the fighting but give them very different perspectives. We’d seen different positions, different romances and watched the fight go from nearly impossible to wrapped up and over. It was a great story but it was time to go.

And now this series is perfect for recommending to people who want to try SFR and/or love space opera but don’t want to get strung out in a series that never ends. Because it’s a wrap - and a great one. 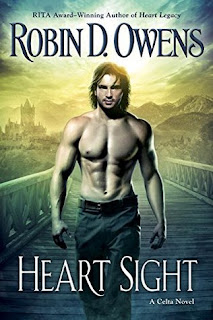 
Some people are going to wonder what this book is doing here, because the Celta series reads very much like fantasy romance and not SFR. But just like Anne McCaffrey’s Pern and Jayne Castle’s Harmony, Celta is a lost Earth colony, founded by refugees from Earth escaping on a spaceship, and that puts it firmly into the realm of science fiction, and therefore science fiction romance - because there’s a romance in every story.

The reason that the original Celtans ran from Earth was because they were not welcome, and in fact were persecuted, because they all possessed some version of psychic talent. The planet Celta, while deadly to many of the Earthan plants and animals, and definitely not kind to the original generation of settlers, possessed something that enhanced those psychic abilities. Now, most Celtans have at least some gift, that they call flair, that determines both their status in society and their best way to contribute to that society.

That the world of Celta feels like a place one could actually live makes this series especially fun. Even with the trials and tribulations that often beset our heroes and heroines, this is a world that feels like it works.

This year’s entry in the series features Vinni T’Vine, the Prophet of Celta. Vinni really can see glimpses of the future - well, any future except his own. But this story is not about his gift, except indirectly. Instead, this is a coming of age story, and it’s also a story about two people who have always loved each other learning to become true partners.

To add icing on this marvelous cake, part of the native fauna of Celta are “fams”, companion animals who can speak with their people. The fams of all species provide both companionship as well as the occasional bit of comic relief. And as many fams are descendants of Earthan felines, plenty of cattitude whenever required.

Most Broken Butterfly Award (Time Not in the Bottle) 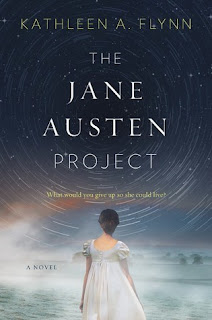 The Jane Austen Project
by Kathleen A. Flynn


One of the questions that lingers over time travel stories is the bit about how much the characters should, shouldn’t, can, or can’t affect the original timeline. Most of the time, there’s a prohibition on changing the timeline in any way for fear that a change in the past will alter the present, not just in negative ways but possibly even beyond recognition.

That’s the concept that gets turned on its head in The Jane Austen Project. The mission of the project is to send two people back in time to not merely meet but actually interact with the author Jane Austen. The mission that Rachel and Liam have been rigorously trained for is to find a way into Jane Austen’s inner circle by romancing Jane’s brother Henry, sneak a look at Jane’s final unpublished and utterly lost manuscript, and diagnose the disease that killed her. The trick is that they will be spending a year back in 1815, and they are not supposed to change anything or leave any evidence of their presence.

Of course it’s impossible. It’s the immersion in that impossibility, and its results, that make The Jane Austen Project so utterly absorbing. 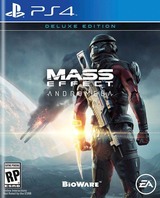 
One of the things I love about Bioware games, both the science fiction Mass Effect series and the fantasy Dragon Age series, is that the player creates a character that can really represent themselves, and has the opportunity to be not just a fighter but also a lover. Admittedly, some of the actual romance scenes are a bit cheesy (sometimes dripping with cheese!) but the way that the choices work and how they affect the character and the story make exploring those romance options one of the reasons that I replay the games as often as I do.

So even though Mass Effect Andromeda had such a poor showing as a video game that it seems to have killed the franchise, I still love all of its possibilities for romance, and the very different romance tropes that it explored.

My personal favorite is the “bad boy makes good” romance. Admittedly, this one also has the most interesting options for fan fiction, because what we see on screen only hints at all the delicious possibilities. But this is far from the only romance available.

There’s a “just kids coming of age” romance between the player character and one of the less emotionally mature crew members. But there are also other crewmember romances that go in different directions. One is with dear old dad’s very serious and buttoned-down second-in-command, who initially resents the player for taking the place that she believes she should have had.

Two of the options are strictly same-sex romances, one with the scientist who still believes in a supreme being and the other with a “rules are meant to be broken” engineer who grows into a responsible co-parent with the help of the player character.

And those are just the human options. The non-human options are equally varied, and just as fascinating. One of the species that humans meet in Andromeda is an entire race of people who all wear their hearts on their sleeves all the time about absolutely everything. A romance with someone who loves everyone and is never afraid to show it to everybody is certainly different.

Some romances are same-sex only. Some are opposite-sex only. And quite a few are possible regardless of the gender chosen for the player character. But they are all fascinating, all different, and all have varying effects on the player, the character, and the game.

This is true for all of the Bioware games, and it’s a part of the experience that has gotten richer (and slightly less cheesy) as their series have continued. Think of these games a “choose your own adventure” romance, with occasional (well, more than occasional) battle scenes.

And just for the record, the romance options in the original Mass Effect Trilogy are all absolutely heartbreaking. If you go there, and I recommend going there, bring lots of tissues. 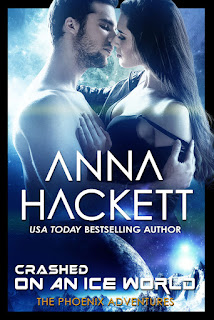 Crashed on an Ice World (Phoenix Adventures #9)
by Anna Hackett


Anna Hackett has won multiple SFR Galaxy Awards since she began writing SFR with At Star’s End, and this year is no exception.

Anna is my go-to author when I really, really need a distraction from whatever feces are hitting whichever oscillating device. I read Anna the night of the 2016 election when I could no longer bear to watch the unfolding train wreck.

What makes Anna’s books such a good distraction? I think it has to do with the nature of SFR in general, and how she does it in particular. SFR is always a balancing act, the SFnal worldbuilding needs to be well-done, fully fleshed, hang together, make sense, however one wants to put that. Hers always does. In the case of the Phoenix Adventures, we have space opera, with two sets of cousins operating at nearly opposite ends of a far-flung galaxy after a human diaspora. Planet Earth is supposed to be a nuclear wasteland and when we do visit, it sort of is - definitely nuclear, if not quite as wasted as rumor had it.

That there would be treasure hunters looking for the lost treasures of the dead homeworld makes sense. And that’s where the other side of the SFR teeter-totter comes in, because in order for it to be SFR there doesn’t just need to be SF, there also has to be R. The romance, whether it ends in an HEA or an HFN (and one of Anna’s series only makes sense as HFN) that romance has to his squarely in the center of the SF story. And, in the case of Crashed on an Ice World, hot enough to melt that ice.

But part of what I love best about Anna’s romances are her heroines. There are no damsels in distress. There are, in fact, no damsels at all, but very strong and usually quite different women who have charge of their own lives, but whose lives can be made better by the right man, who does not sweep them off their feet but does stand beside them fighting the good fight.

That many of her heroines are geeky enough to make them easy for me to identify with is icing on a very tasty cake.

Crashed on an Ice World arrived just in time for Xmas. It turned out that I really, really needed a distraction this holiday. I found myself getting lost in Anna’s latest Phoenix Adventure as I sat by my mother’s bedside while she was in hospice. This marvelous story took me away mentally from someplace that I desperately needed to be in physically when I just couldn’t cope anymore.

The cold of Anna’s ice world, and the heat of the romance, kept me from going out of my mind or flying off into pieces. And I’m more grateful than I can say.