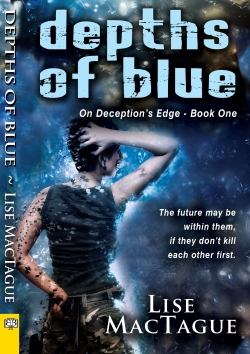 Depths of Blue is an incredible sci-fi romance adventure. It meets all of one’s needs for high stakes and compelling, competent heroines. The story immerses readers in a fully realized world and by extension, offers social commentary galore. And the action-adventure elements don’t pull any punches. One heroic rescue scene in particular left my jaw happily hanging.

This debut book focuses on the fateful meeting of army sniper Jak Stowell and smuggler Torrin Ivanov. Their worlds collide after Torrin is trapped on Jak’s home planet and the sniper sent to kill Torrin is her only hope of survival. The pair must overcome a devious enemy, dangerous terrain, an oppressive society, and painful memories, all for just the chance to fall in love.

Depths of Blue lingered in my mind long after I’d finished it, for a number of reasons: flawed, likeable heroines, a tender romance, fascinating secrets—and did I mention how cool Jak and Torrin are? Each has an amazing skill set that put stars in my eyes. The story’s exploration of gender issues is especially intriguing. Depths of Blue offers a seamless integration of science fiction and romance and the overall progressive nature of the story gave me all the feels I could hope for. 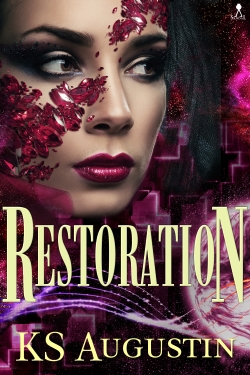 Restoration features a forbidden May-December romance. Van is a mature, older heroine with a fully-realized life, including friendships, family, career, and the complications that come with her advancing age. A philosopher by trade, she’s tasked with helping the hero, Eton, re-integrate back into Rahfonian society after he’d lived among aliens since childhood.

Restoration is remarkable in a number of ways. Chief among them is the story’s non-Western setting. It’s the type of story element that makes me go, “Oh wow, I really needed this! The whole genre needs more of this!” Restoration is character-driven and prompts one to reflect on the impact of major life changes and milestones, especially as it relates to aging. The plot is of the quiet kind, focusing as it does on Van’s day-to-day work with Eton and their forbidden romance.

There are no “shoot ‘em ups,” space battles, or violent confrontations. This story is about deeply personal stakes as opposed to external ones. Restoration is a cerebral palate cleanser and the subtle creative choices are wonderfully innovative. 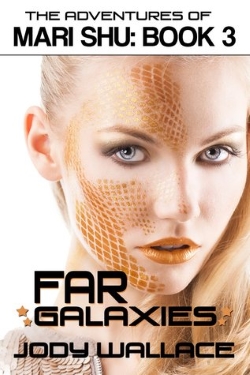 Raunchy sex, devious humor, and numerous, “Holy sh*it, did I just read that?” moments abound in Jody Wallace’s Far Galaxies, a story that continues the madcap shenanigans of the utterly clueless, yet amazingly capable heroine of this “choose your own adventure” style story.

Far Galaxies deftly dissects, skewers, and makes passionate love to the sci-fi romance genre. It’s not only one of the funniest stories I’ve ever read, it’s also one of the most insightful. No topic is too taboo and this installment tackles a mind-boggling number of tropes, characters, settings, and scenarios that we often encounter in SFR.

Far Galaxies is high camp of the highest order, but it also resonated on many levels. It made me laugh, it made me think, and then it made me laugh again. Basically, the story bombarded me with entertainment—what more could an SFR fan want?! 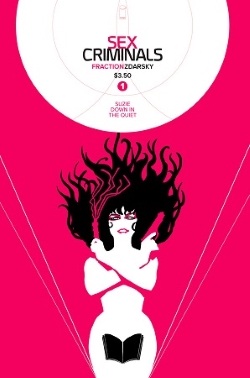 Sex Criminals (2013-present) is still ongoing as of 2016, so we don’t know if an HEA awaits, but everything else about it is tailor-made for SFR fans and that alone makes it worth of a Galaxy Award!

The title screams “Gimmick!” and so is the premise: a couple has the power to stop time when they orgasm, and then they take advantage of it by robbing banks. That said, Sex Criminals offers grounded, genuine characters who deal with real issues even as they navigate a fantastical setting. The story's tone is a mix of poignancy, angst, wryness, and humor.

Suzanne (a librarian) and John (an actor) are like, the sweetest couple ever. They’re ordinary people who are down-to-Earth despite having an out-of-this world ability. The art is really nice, with engaging visuals.

Along with a burgeoning romance and superhuman abilities, Sex Criminals includes social commentary and a respectful exploration of sexuality. I kept expecting to bump up against glaring examples of the male gaze, but the gaze strikes me as gender neutral—a refreshing change. While I’m not sure an HEA is on the way, Sex Criminals is an adventure I’m keen to continue.

The Overkills are a hopelessly-in-love couple in a story with a 1960s science fictional setting and superhuman elements. Scarlet is the supervillain boss-turned-antagonist whom the three main Minion characters must defeat before they meet their true master, Felonius Gru of the DESPICABLE ME films. Herb is her groovy inventor husband with a penchant for warm milk and cookies. Though the Overkills are strictly plot devices and secondary characters, the filmmakers gave them just enough backstory, sympathy, and edginess (albeit for a kids’ film) to become a cult-worthy force of their own.

Scarlet is the Alpha wolf to Herb’s Beta fox, and what a dynamic and deliciously evil couple they make! They’re not only equals, they’re equally cool. They’re rich, powerful, and have fabulous adventures (even if the one in MINIONS doesn’t end so well for them). The film also offers a few romantic and even borderline racy scenes to showcase their passionate devotion.

The sci-fi romance genre is terrific about consistently delivering extraordinary heroines and the heroes who love them and the Overkills experience only reinforces my interest in such pairings. Unfortunately, SFR couples of any kind rarely appear on the big screen. Even Scarlet and Herb are like an SFR-ish Trojan horse, arriving as they do in a wacky animated kids film. Still, their existence gives me hope that more like them are on the way—and better yet, ones geared toward adult sensibilities.
Posted by Heather Massey at 12:00 PM