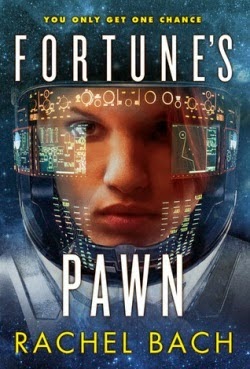 The heroine, Devi Morris, is Paradoxian by birth, and a professional mercenary by trade, who’s driven to achieve her ultimate goal. The man in her life and their on-again, off-again, just-in-it-for-the-minute relationship is no match for her ambitions. She's independent, career-oriented and beyond the influence of mere male persuasion. Proposal of marriage? Pshaw! Not when the adventure of a lifetime is calling. She's determined to win a security position on a ship called the Glorious Fool, a sought after gig that's led many a talented merc to graduate to the ultimate prize of mercdom—being accepted into ranks of the elite Devastators. Or else to meet a horrible, untimely death. More typically, the latter. But the MC isn't intimidated by the mere threat of death. Little does she know what lies ahead!

The hero is Rupert Charkov. I didn't know what to make of him at first. He doesn't seem your typical hero material and he isn't employed in your typical hero's job. He's a...well...he's a cook. Yes. A cook. Oh, and he babysits the captain's daughter, too. Okay, he's got those classic good looks, he's an all-around nice guy to the heroine and he does have the ponytail thing going on, but....yeah. He's a cook.

This story features some truly alien aliens. I love me some Xith' cal! Devi's first introduction to the aggressive, killing-machine alien species is actually quite humorous. Her second encounter is anything but. The Xith' cal are a bit like the Alien franchise bad boys, but bigger, badder, meaner, lizardy-er and much more mobile. The stuff of pizza-driven nightmares. Can anything be badder or more deadly than the Xith' cal, you ask? Surprise! Yes. There is one thing. The cook. Wait! Seriously? Yes. The cook.

From Devi's deft handling of chauvinistic peers and overbearing superiors to the spine-tingling encounters with things that go bump, boom, and squish in the night, Fortune's Pawn was a rollicking, suspenseful adventure, and a superb introduction to both Devi Morris and the wild and strange universe she lives in. The romantic conflict between Devi and Rupert was beautifully developed, and author Rachel Bach crowned it all with an angsty surprise twist at the end that had me scrambling to order book two. The second book of the Paradox Series took some of the mysterious elements in Fortune’s Pawn and expanded them exponentially. I had a feeling that there were big conspiracies swimming just beneath the dark surface in the first book, and in Honor’s Knight they begin to surface and develop. First there’s a monstrous threat that can’t be seen, touched or fought, but is powerful enough to destroy planets and bend time. Add then there’s the wonder surrounding the elusive Lelgis species, their huge and beautiful fish-ships, and their powerful, all-knowing, void-dwelling queens. And perhaps strangest of all, the “shields” used by the (supposed) good guys, a powerful but insane entity named Maat and Maat’s “daughters.”

Honor’s Knight is almost non-stop action and tests Devi and her partner—a custom mech suit she named Lady Grey—to the limits. Devi is on the run from just about everyone, human and alien alike, and especially from Rupert. She survives Lelgis attacks, Xithcal gladiator games, and a knock-down, drag-out brawl with Rupert. The alien threat continues to grow until it seems there is nowhere Devi can go to be safe and no one she can trust. Except, perhaps, Rupert. If she dares. 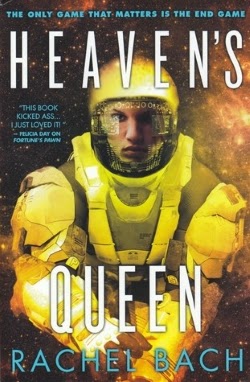 By book three of the Paradox Series, Devi is in so deep she seems utterly doomed. Everyone and everything is trying to hunt her down, both for the deadly secret she carries and the grave threat she poses. The situation keeps going from bad to worse to impossible, until it seems there is no escape for her but death. Her only true ally, Rupert, is captured and slated for execution…or worse. But giving up isn’t in Devi’s DNA. She still manages to save the universe (literally) and Rupert in spite of insurmountable odds. She simply never gives up.

Devi’s reward is to finally accomplish what she set out to do, although she pays a heavy toll to achieve it. Heaven’s Queen puts a positive wrap and a HEA on the end game, but still leaves the door open for more adventures in Devi’s future. 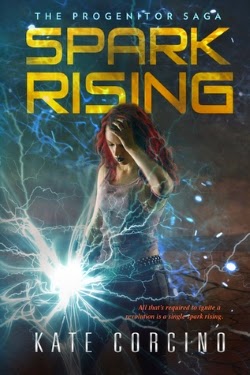 Spark Rising is a fresh, imaginative tale that takes place in a recovering post-apocalyptic Southwest US where select humans have been bred for the ability to generate power by interacting with Dust, a mysterious substance left behind when a cataclysm destroyed all fossil fuels on Earth centuries before. These special individuals are called Sparks, but their level of power and control can vary. The heroine, Lena, is an extremely talented--and very dangerous--renegade Spark who lives "off the grid" and avoids capture by those who control her zone. She's been in hiding or on the run for most of her life, ever since her parents reported her dead as a young girl in order to protect her from their malicious leaders.

The hero, Alex Reyes, is an agent sent to find and recover Lena to deliver to those in power, but he's also secretly working as an underground activist. When Alex first confronts Lena he immediately recognizes—and is affected by—her rare and potent abilities, and knows he must get her to safety before she falls into the hands of those who would use and destroy her. Alex recognizes that this is a game-changer. Lena could change the future—for everyone. But getting the wary and untrusting Lena to accept him as an ally may be impossible.

The intricate world building in Spark Rising is a real delight, as are the high stakes of the plot and lush descriptions. But perhaps the most spellbinding is how the abilities of the two main characters create a compelling romantic conflict that crackles with tension and energy. Spark Rising is the first book in the very promising Progenitor Saga. 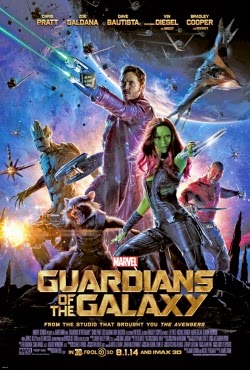 GUARDIANS OF THE GALAXY is a Science Fiction romp with romantic elements that makes for a fun, feel-good Sci-Fi celebration. The film took great strides in bringing the entertainment value of quality Science Fiction back to the forefront of the American consumer's mind, with its huge scopey sets, interesting characters, action-packed storyline and nostalgic sound track. GUARDIANS OF THE GALAXY is an engaging, energetic cinematic experience.